Red light therapy is a safe, effective, and natural treatment option for hair loss that’s gaining popularity with professionals and the public. Backed by a strong base of peer-reviewed clinical research, red light treatments have increased hair count, hair density, and hair thickness for men and women alike. In addition to being a natural baldness treatment for both sexes, lab studies have even shown it can help regrow the coats of dogs and other mammals. And all of these benefits come without any negative side effects.

This article breaks down the research on red light therapy and hair regrowth. Read on to learn the science behind natural light and its effect on baldness.

Red light therapy is a natural hair loss treatment that’s been found safe and effective across numerous peer-reviewed clinical studies, with plenty of happy users to back it up. If you’re not familiar with red light and its benefits, this article gives a good overview of what it is and how it works.

The short version is this: A quality LED light therapy device delivers safe, concentrated wavelengths of natural light to your skin, with no chemicals, UV rays, or excess heat. These red and near infrared wavelengths of light stimulate the mitochondria in your cells similar to natural sunlight, reducing oxidative stress and increasing circulation, so your body is able to make more core energy to power itself.

Making energy more efficiently throughout your body improves physical function, speeds the healing process, and lowers inflammation & pain, as demonstrated in numerous peer-reviewed studies. [1] It also has a major stimulating effect on the dermal papilla cells, which play a big role in the regulation of hair cycling and growth. [2]

Hair loss is one of the most common effects of aging, impacting over half the world’s population. More than 50% of men over the age of 40 are affected by Androgenetic Alopecia, or common hair loss. 75% of women over 65 also suffer from alopecia. [3]

Fortunately, red light therapy offers a safe and natural option for preventing and reversing hair loss. And it’s backed up by a wealth of peer-reviewed clinical studies, trials, and meta-analyses.

A 2019 meta-analysis examined 8 clinical studies, comprising a total of 11 double-blind randomized controlled trials. The quantitative analysis showed a significant increase in hair density for people who were treated with red light therapy. There was a significant increase in hair growth with red light therapy treatments versus sham and placebo treatments. [4] 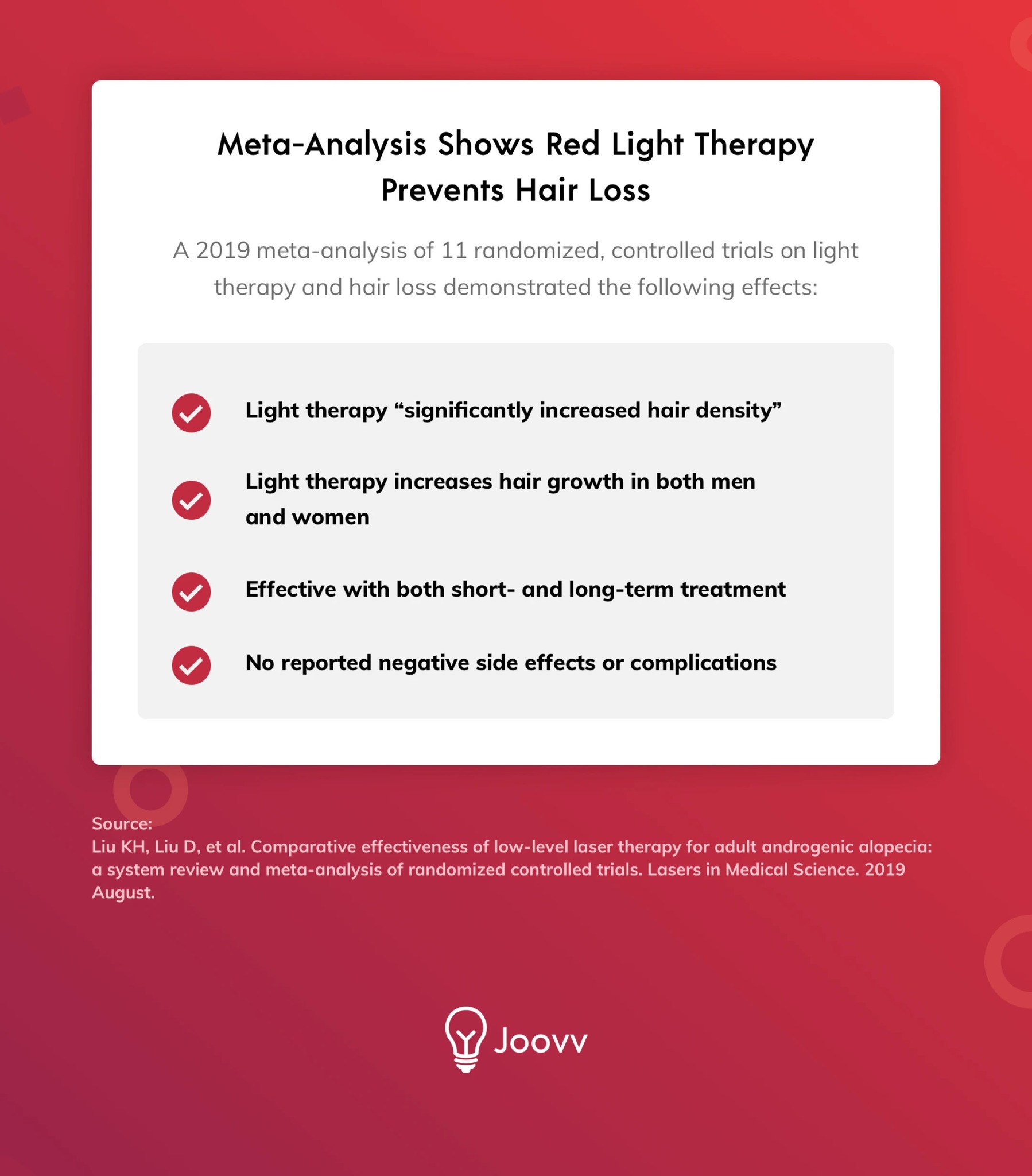 Red Light Therapy More Effective than Hair Growth Drugs, with No Side Effects

In a single study from 2018, researchers conducted a 6-month, randomized, double-blind trial with both red light therapy and a sham device. With 100 people, they applied real red light therapy to one side of each participant’s head 3 times a week for 30 minutes, while the other side received a sham treatment. At the end of the trial, the side that received red light treatment had significantly greater hair coverage than the sham-treated side. Hair thickness, hair count, and hair regrowth also saw significant improvements. Researchers concluded that red light therapy is an effective, safe, and well-tolerated treatment for male pattern baldness. [7]

In 2019, researchers conducted a 6-month study that examined men with pattern hair loss and changes in the protein expression in their dermal papilla tissues, which are responsible for hair growth. Participants received 25 minutes of red light therapy treatment every other day for 6 months. By examining which proteins were up-regulated, researchers concluded that red light therapy promoted hair growth and reversed the miniaturization process of balding by enhancing dermal papilla cell function. [8]

Another study that aimed to define the safety and physiologic effects of red light therapy on males with pattern baldness was conducted in 2014. 44 men participated and had a section of their scalp trimmed to 3 mm height. The area was tattooed and photographed. One group received red light treatment every other day for 16 weeks while the second group received a sham treatment. Upon completing the study, researchers found [9]:

Just ten years ago, the options for women’s hair loss solutions were limited. With more attention being given to female pattern hair loss over the last decade, many studies and treatment methods have sprung forward. Red light therapy is one of the most tested and proven hair loss treatments for women today.

To study the effectiveness of red light therapy on women with normal hair loss, one of the researchers who conducted the previously-mentioned study on men decided to recreate it for women participants with hair loss. The double-blind, randomized trial was conducted in the same way: 47 women participants had an area of their scalps trimmed to 3 mm height. The area was tattooed and photographed. One group received red light treatment every other day for 16 weeks while the second group received a sham treatment. Upon completing the study, researchers found even better hair growth results for women than men [10]:

Numerous lab studies have also shown a wide range of other hair growth benefits from red light therapy. Here’s a quick look at some of the peer-reviewed research:

Hair Growth for Dogs with Alopecia: 7 dogs with alopecia, of different ages, breeds, and genders, received red light therapy treatments. At the end of the study, coat regrowth was improved in every animal, and was greatly improved in 6 out of 7 dogs. [13]

Lichen planopilaris is a type of scarring hair loss that occurs when the common skin disease, lichen planus, affects areas of skin where there is hair. This condition tends to be progressive, and the most effective treatments have response rates of only 10%. Lichen planus is an inflammatory disease and red light therapy is a well-documented natural anti-inflammatory treatment. To read more about red light therapy’s effect on inflammation, check out this article.

While more studies are needed, this 2017 trial is a promising start. 8 participants with lichen planopilaris were treated with red light therapy for 15 minutes daily, for 6 months. The results were positive [15]:

You can read more about red light therapy and its many natural health benefits in Joovv’s learn library.

[1] Hamblin M. “Mechanisms and applications of the anti-inflammatory effects of photobiomodulation”. AIMS Biophys. 2017.

Joovv light therapy products are indicated for use in the relief of muscle and joint pain, including arthritis and muscle spasm pain, and increasing of blood circulation, and relaxation of muscles. The information provided in this article is for educational purposes only and is not intended to support the safety or effectiveness of Joovv devices, or diagnose, treat, cure, or prevent any disease. It’s not a substitute for a face-to-face consultation with your healthcare provider, and should not be construed as medical advice.

Red light therapy is one of the safest, most effective…

Get in Touch for a Consultation

We will discuss potential treatment plans for varying conditions during your consultation, and steps you can take to help improve these.

Any cookies that may not be particularly necessary for the website to function and is used specifically to collect user personal data via analytics, ads, other embedded contents are termed as non-necessary cookies. It is mandatory to procure user consent prior to running these cookies on your website.

We are delighted to announce our in clinic bookings will be back open as of Tuesday 7th July. We will be following strict government guidelines at all times in all of our clinics, and ask that if anyone is feeling unwell or showing symptoms, to reschedule their appointment to a later date. We look forward to seeing you all very soon!